The Leapt Froala Editor bundle allows to easily integrate the Froala WYSIWYG editor in a Symfony form, with shared configurations. 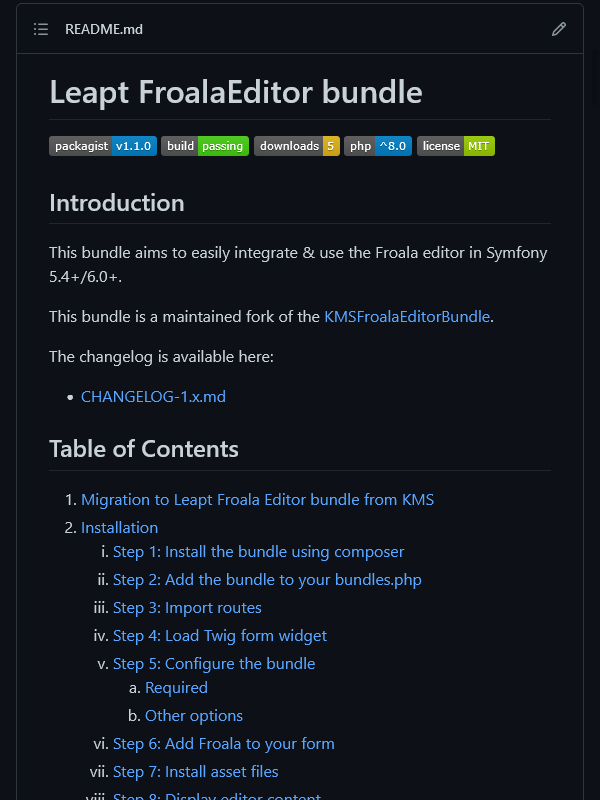 I started using the KMSFroalaEditor bundle in early 2018, when my employer agreed to use this WYSIWYG.

At the beginning, I only made small corrections here and there, upgrading the WYWISYG files (which were then directly in the bundle).

I decided in 2019, at the time of the Hacktoberfest, to contribute substantially to this bundle in order to allow it to be able to run as soon as possible on the latest versions of Symfony.

This allowed me to better understand the code, to make documentation corrections (a big feature, shared configurations, was not documented; the fact of wanting such a functionality and to browse the internal code allowed me to see that it existed, and modify the documentation accordingly), not to force the user of the bundle to have the WYSIWYG files in the bundle, but to be able to use his own, etc.

At the end of 2021, I didn't like the direction of the bundle, I decided to take it over under the Leapt namespace that I have been using for some time, in order to be able to make the necessary changes for compatibility with higher versions of Symfony and bug fixes.